Church Building.
The Parish Church of Saint Mark is a Grade two listed building in Winshill, a suburb of Burton on Trent which lies on the South Derbyshire side of the River Trent. The church was financed by and built at the request of its patron, John Gretton, Esq., (of brewers Bass, Ratcliffe and Gretton) on land supplied by the Marquis of Anglesey. The church is sited on a prominent hill named “Wheadley Nob”, this exposed position within the area of Winshill makes the church clearly visible to many of the population.

The church was completed in 1869 and its consecration took place on 13th September, 1869. Although it now lies within the boundaries of the diocese of Derby, it was part of the diocese of Lichfield when built, and between 1884 and 1927 it was part of Southwell diocese. The service of consecration was performed on behalf of the Bishop of Lichfield by William Garden, the Lord Bishop of Auckland, New Zealand. The present patron is Lady Gretton who still takes an interest in St. Mark’s.

St Mark’s church was designed by Edwin Holmes of Birmingham and is in the early decorated Gothic style with geometric tracery, nave and aisles, chancel and south west tower with broach spire. 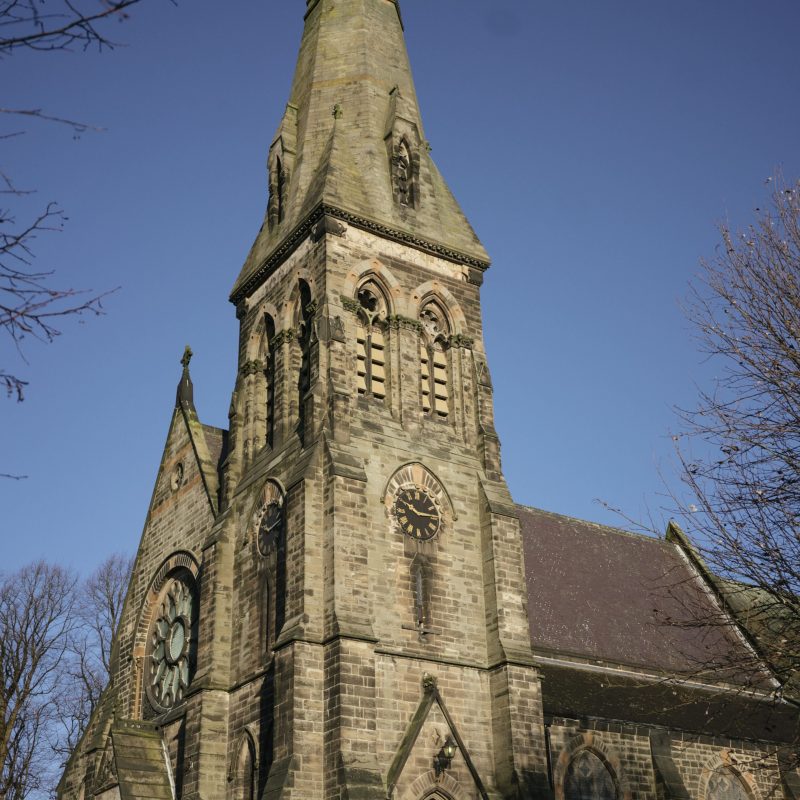 St Mark’s Church Yard
St Mark’s large churchyard is carefully maintained and contains a number of protected trees and other plant life. We regret that the church yard has no space for new graves. If you wish to be buried it would be at Stapenhill Cemetery. We do however welcome the interment of ashes in our churchyard.

Please speak to a member of the clergy for further information. 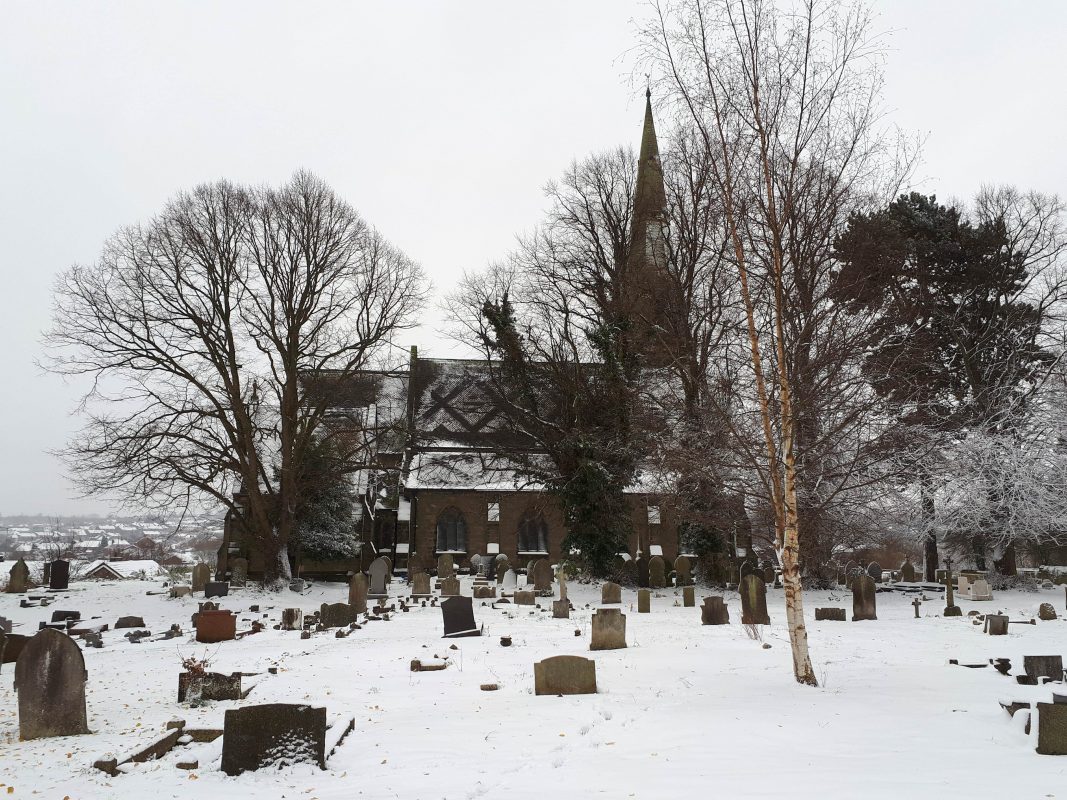 Features of interest and treasures at St Mark’s.

Organ
Our grade two listed organ has 24 speaking stops, 5 couplers and 6 composition pedals. It is believed to be the earliest three manual organ still surviving in the Diocese of Derby. It was one of the last instruments whose design and construction (in 1870) was personally supervised by Joseph W Walker, founder of the organ-building firm in London. The instrument is described as ‘state of the art’ in the book ‘Historic Organs in Derbyshire’ by Rodney Tomkins, formerly organ adviser to the Derby Diocese. It survives without radical alteration, and still leads us in the majority of our sung worship.

Bells
The tower has a peal of six bells, struck by Taylor’s of Loughborough which range from D at 7.5cwt to F at 18.5cwt. The total weight of the bells is 67 cwt 2 qrs 9 lbs. They are rung each Sunday, and for weddings, funerals, and by visiting Campanologists.
See our Church Groups page for more information about the bell ringers at St Mark’s.

Church clock.
The tower also houses a clock with Cambridge chimes, made by John Smith of Derby in 1880, which still gives important service to the people of the parish.

Monuments to the fallen
Within the church, affixed to the South Wall, are two war memorials, one for the first world war and one for the second. Inscribed on these memorials are the names of those residents of Winshill who gave their lives during the world wars.

War graves, and the grave of Lance Corporal William Coltman
There are a number of graves of service personnel from both WW1 and WW2. The most notable of these being the grave of William Harold Coltman VC; DCM and bar; MM and bar. He was the most highly decorated non-commissioned officer in the First World War.  He enlisted in January 1915 and was a devout Christian, many medals were awarded for his gallantry and bravery shown when stretcher bearing.  The Victoria Cross Trust has recently refurbished the grave and desires to have it listed. 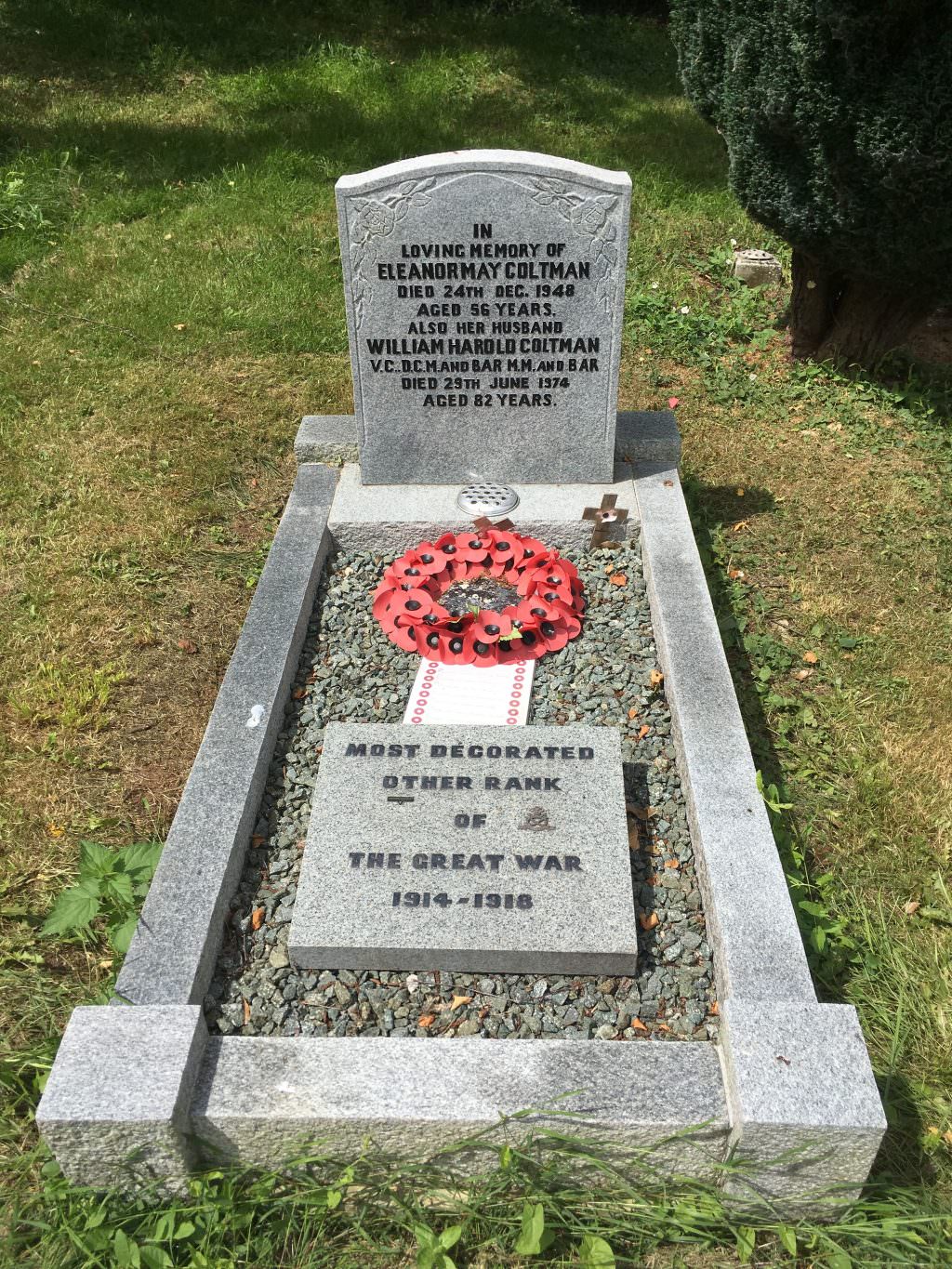 Over the west door.
The Wheel Window
The rose window is reputed to be a replica of that in Turin Cathedral (though the cathedral is dedicated to John the Baptist). The figure of St Mark is represented in the central roundel with the spokes radiating from this depicting stylised flowers and foliage.

In the chancel
The East window
This shows Christ in the centre, preaching to the multitude, as in Matthew 5. Around this are illustrations of the parables of the Good Samaritan, the Talents and the Sower, as well as the stories of the healing miracles and the Pearl of Great Price.

The Lancet window
This narrow window on the south side of the chancel shows St Mark with a quill pen, denoting his status as the writer of the gospel that bears his name.

South aisle
Behind the Lady Chapel altar.
This window illustrates the verse “The Spirit of the Lord is upon me, because he hath anointed me to preach the gospel to the poor” (Luke 4:18).
It is dedicated to the memory of Rev. MH Beardsmore, who died in 1887 and who was curate in the parish for 10 years.

Jesus welcomes children.
This window illustrates the story from Matthew 19:14
‘Let the children come to me and do not hinder them; for to such belongs the kingdom of heaven’. It is in memory of Clara Gretton (1843 – 1887) and dedicated by her sisters.

Presentation of Jesus in the Temple.
This window illustrates the story from Luke 2: 22 – 38, when Jesus was taken to the Temple by Mary and Joseph. There his divine nature was recognised by Simeon and Anna. It is dedicated to the memory of Rev GDF Frampton, Vicar of Winshill from 1868 – 1910. Below the window is a plaque in memory of his wife, Anna Maria Frampton, who died in 1921.

North aisle
Christ and his disciples.
There is no dedication on this window, which shows Jesus with a group of his disciples, apparently by the sea.

St Cecilia.
She is the patron saint of musicians, and said to have been martyred in Rome in about 230AD. Her feast day is 22nd November. The window is dedicated to the memory of Henry George Tomlinson, organist of St Mark’s, who died in 1918, and his wife Cecilia Mary, who died in 1912. St Cecilia is pictured playing a small organ, with a written quotation of the first bars of the Hallelujah Chorus from Handel’s ‘Messiah’ across the figure.

Wise and foolish maidens.
This window illustrates the story told in Matthew 25: 1 – 13, with the wise maidens and their oil filled lamps ready and waiting to greet the bridegroom at the wedding feast. There is no dedication on this window. 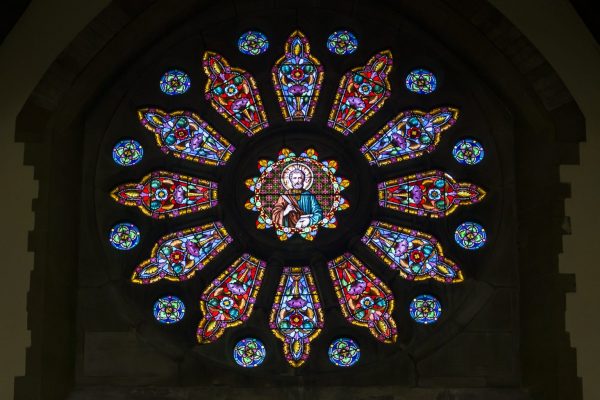 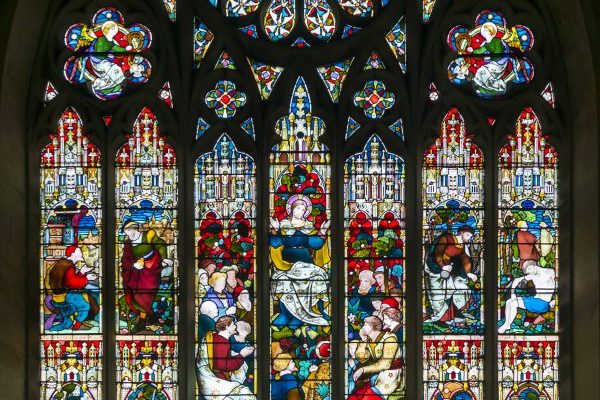 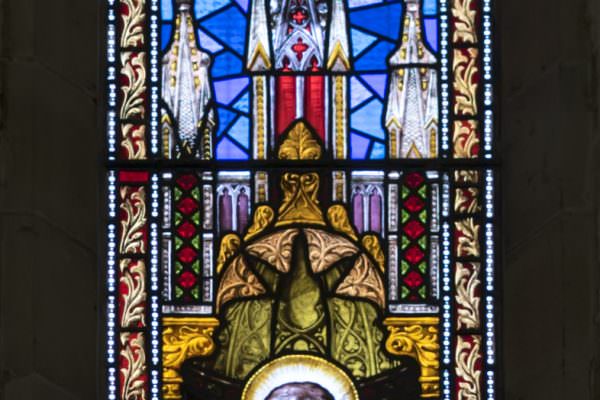 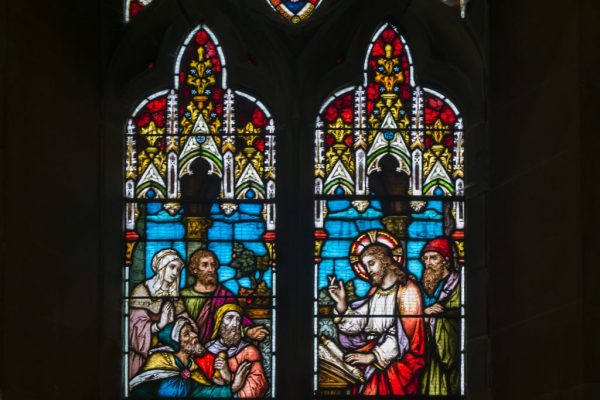 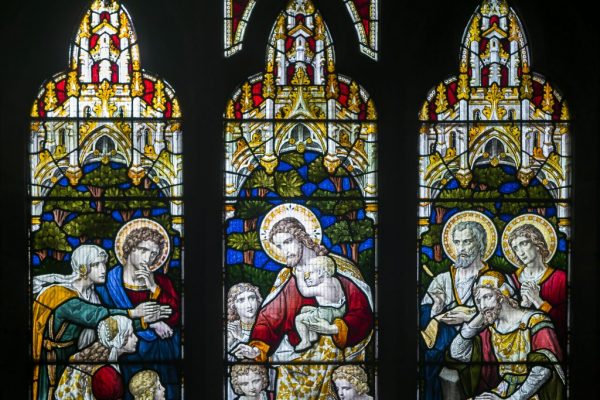 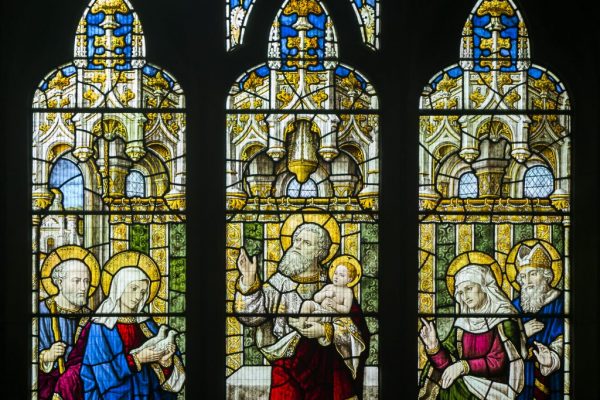 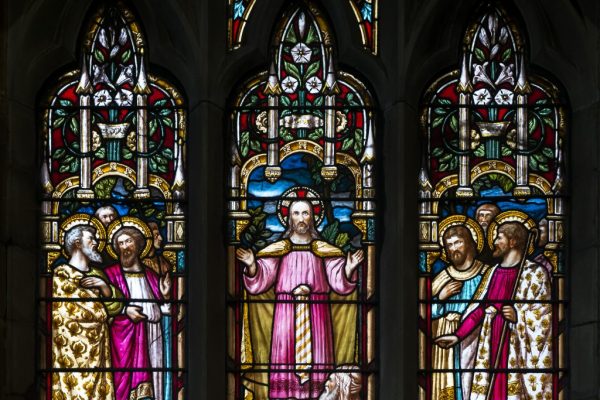 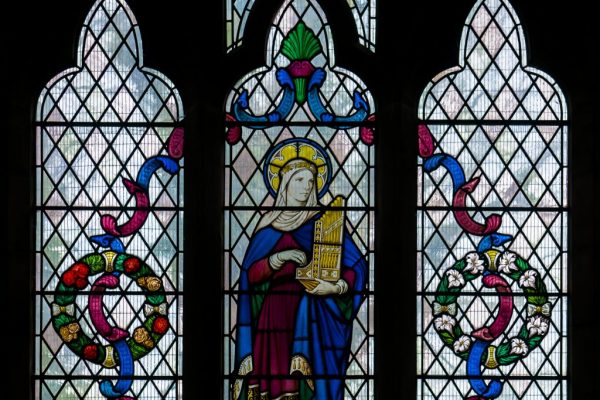 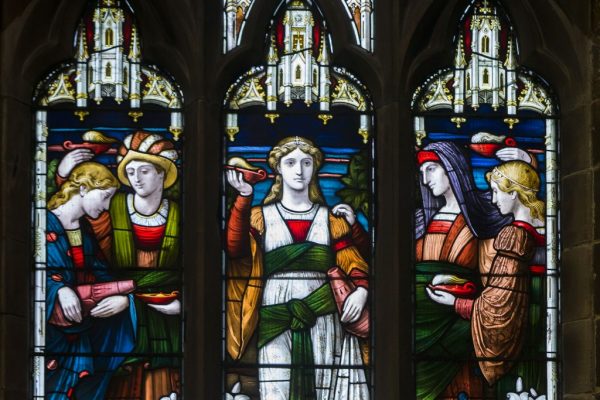 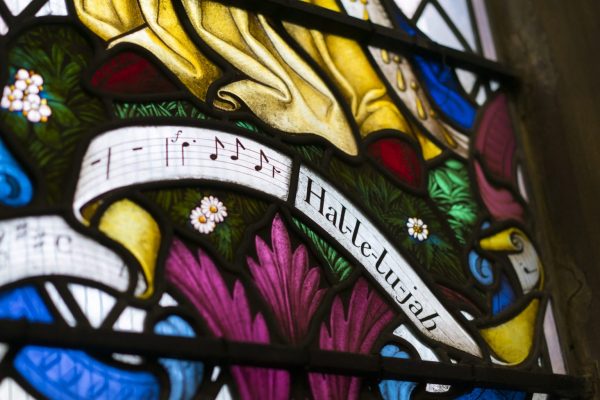 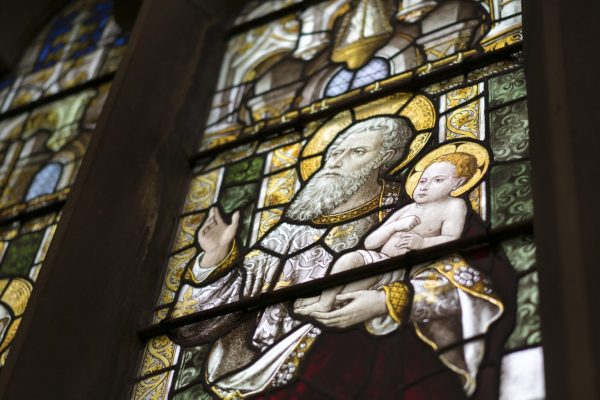 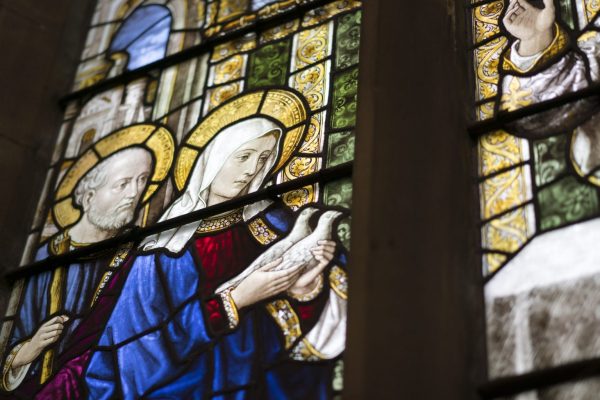